A Time To Reflect 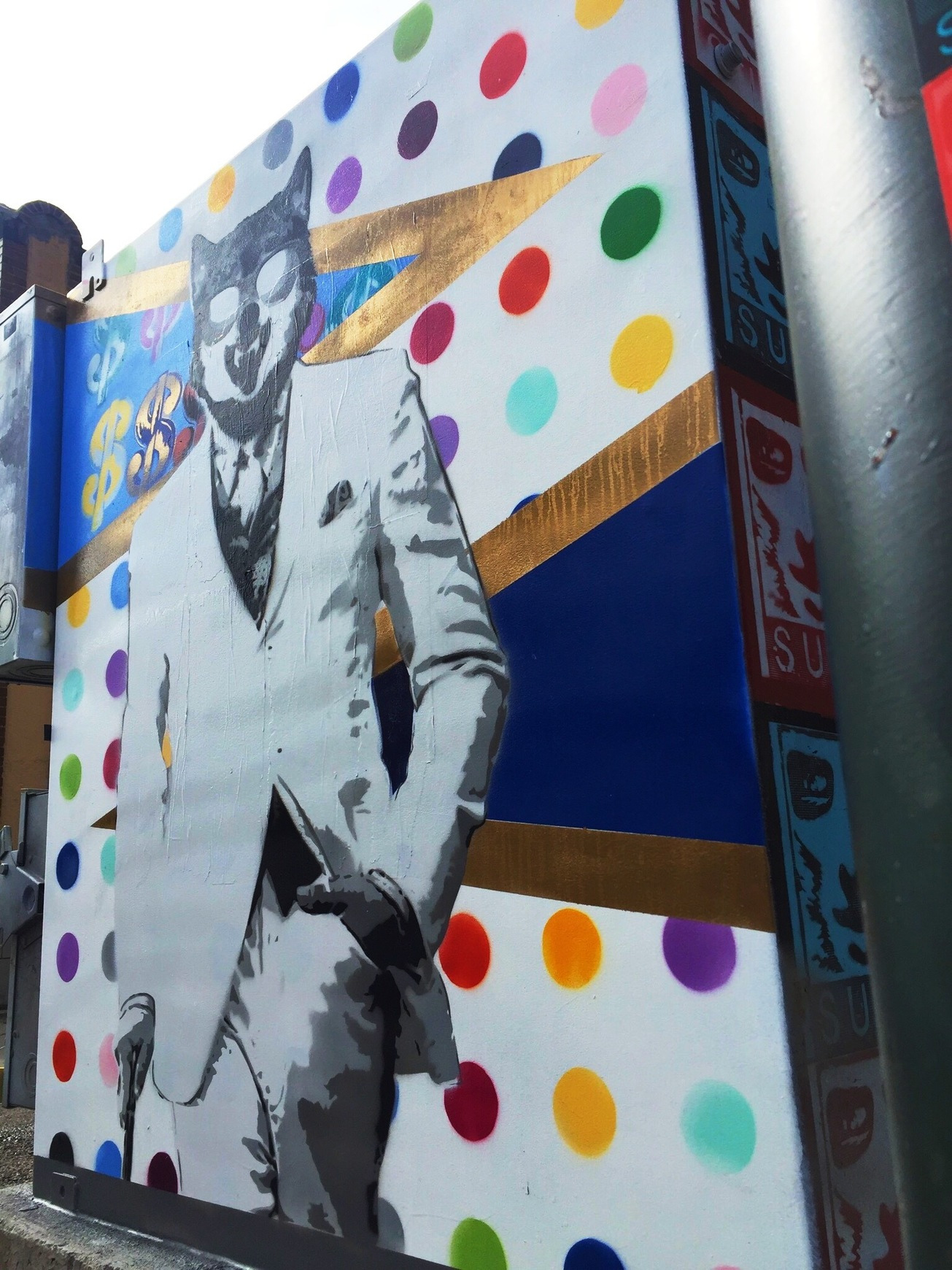 A reflection from my first commissioned street art project

It’s a  Monday, and I’m sitting at Rubio’s Mexican eatery. Having just finished a tasty burrito Especial, I sit here with a few minutes to reflect. A time to reflect on my first commissioned street art project.

It was very happenstance, the way it came together. Sort of. I remember I had just got fired from my then (and last) corporate job, and thinking to myself, “I need to find a way to get my art out into the world. . . Aside from Instagram!” I had yet to have an art show of any kind, and the closest thing I’d done to “street art” project was slapping up SURJ stickers anywhere I could (gas stations seem to be my preferred real estate.)

That said, and, having been currently unemployed, I decided to do a deep peruse on the internet for anything resembling a way of displaying my art. I looked for galleries, I looked for art fairs, I began to ponder the much more, um, we’ll call it “legal grey area” of putting up stencils or wheat paste. I’ve always been an “ask for forgiveness” kind of guy, so I was considering ALL possibilities. This was starting to look like the route I’d be pursuing. after about an hour (or 3) of looking at different avenues, watching more than a handful of YouTube videos of “How to do street art” the smartest way possible, I found an ad. Honestly, I don’t remember how I found it. Or even which exact website. I just remember it was a call for artists to paint the utility boxes along East Colfax in Denver.

For those not familiar with Colfax Ave, it boasts of both infamy and cache value simultaneously. It’s home to both hipsters and homeless and is constantly in a state of gentrification. The crime rate is extremely high along the busy street, and murder, sadly, is not uncommon.

However, Colfax also has a lot of the better music venues (The Fillmore, The Ogden, Bluebird and more), copious amounts of decent street art murals, and as stated earlier, seems to attract a lot of younger, good-looking people that we’ll call hipsters. There’s also no shortage of prostitutes and transgendered locals. Low and behold, it is “cool” for lack of a better word, but there is definitely an element of danger, of which I had a personal run in that could have easily escalated (I will go into this later.)

After seeing the ad wanting artists to help beautify the eyesores known as utility boxes up and down East Colfax, I decided to submit some of my work. It was a contest, and winners were to be paid! I thought, “sweet, if get selected it would be a great place to showcase my work.” Maybe it’s not MoMA of New York or the. Guggenheim, but it was a busy, BUSY stretch of road in Denver, and would have a lot of foot traffic and visibility.

Now admittedly, the nerves kicked in. Not only had few people been exposed to my work, but I was going to have to paint in an open space AND, it would be vertical. Now that may not sound so bad, but up until this point, I’d painted ALL of my canvases on a flat surface. At the time, I was doing mostly stencils and would use coins, cans & whatever to keep my stencils weighted down. Also, my canvases were not huge, so it suited me nicely (that has since changed, and, due to both the size of canvases I work on and the fact that I’m simply more seasoned, I now enjoy easels and have a few of them.)

I had been diligently painting steadily, sometimes putting in 12-hour paint sets on any given day. Additionally, I do a lot of design, scaling, cutting, canvas building from scratch, and on. . . . So to get the opportunity to paint this utility box, was quite a thrill. Now, I know communities do this all the time, so it’s nothing new. However, the location is super dope, and I knew the artists would be pretty decent, so I was excited to bring my A-game.

Ultimately, my “spot”, was outside of the Ogden theater (directly in front of the box office) and is still there, which rules!
When It came to preparation, I had to first pick an image, and then start planning on how I was going to translate the image to the utility box.

The first mission was to go down and get the dimensions. There are 2 sides, and the panels were roughly 3 1/2 in height. This is a nice size for stencils. In particular, MULTI-LAYER stencils. After taking my measurements, I decided to put up a stencil I had (my SURJ icon.) Unbeknownst to me, the city was not in the know, and this was my first, albeit accidental true illegal graffiti. The manager from the Ogden came out and asked if I had a permit? Of course, I did not. I did explain the project and they seemed to suspect. I decided I should probably get out while there was no police around just in case. . . . Thankfully, I did. I drove back a half hour to peep it out, and someone had already sprayed over my stencil. Someone had called graffiti removal and it was sprayed over almost instantly.

So went to the curators and let them know about this, and finally, it was remedied. I went back with my permit (it wasn’t really a permit, but close enough), and introduced myself to the local business owners. I met some of the staff at the Ogden. They were super cool. As well as management at the Cigar shop across the alley. Now, I was legal. Legal enough. . . .

First, I was set to paint my Atlas Loved. I painted the hearts as a backdrop and painted the side panel. I was mentally prepping to put my main graphics “vertical.” It was 6 layers, and again, I had yet to do stencils on a vertical surface. Ok, I’m no pussy. So I said fuck it, let’s do it.

Now, to put it in perspective, the reason a “vertical surface” gave me a bit of anxiety, is because I couldn’t weigh it down with cans, coins, paint can etc. So this would be the first time I’d use spray adhesive. Additionally, I had never sprayed over a backdrop, so I honestly didn’t know what to expect.

So, I had my 6 layers of 3-foot stencils in tow. Of course, it was BALLS hot (it literally hit 102 degrees that day), and windy as well. I did a few spray tests with some small stencils and felt some comfort. However, when I got to my spot on Colfax, I was ready to spray the first layer (the silhouette layer) on my box. I sprayed back of the stencil, had my registration marks, and was ready to rock!

The stencil had the adhesive on it, and as I began to position the first stencil, the wind kicked in and my oversized folder housing the remaining 5 stencils blew out into the street. the Montana Gold cans I had to weigh down the folder were rolling into Colfax, along with my stencils, and was stuck holding my precious first layer! So, my careful tendencies quickly gave way as I put the stencil in one hand and used the other to grab my other stencils that were blowing into the street. I then grabbed the spray paint cans and started tossing the stencils and cans onto the sidewalk to simply salvage and prevent any real disaster! Long story short, I saved my stencils. However, I still hadn’t sprayed a single layer.

As I went back to spray my first level, having some comfort my stencil folder would not blow away again, i put the first stencil on the metal panel, and the tack was gone. I had to re-spray the stencil with adhesive. Again, anxiety built as I had no precedent with spray adhesive, and wasn’t sure if this would even work, or if it would rip in 2 as I tried to pull it off after spraying. As I began to place and position the stencil, it would not flatten out on the panel. The spray made it warp in odd areas. Long story long, i positioned it, prayed to the man upstairs, and low and behold, it worked! I put a layer on my utility box! And then another layer. And another. Eventually, I had a true piece of art on this utility box that was proud of. In spite of the new challenge, it was awesome. It was scary, but I knew I’d figure it out. I might fuck it up. But if that happened, I would have just repainted it. But that never happened. Ultimately, the 2 images were pretty close (if not precisely) what my vision was. The box is still going strong right in front of the Ogden on Colfax! If you see it, please take a snap and tag me on Instagram @Surj_